Seed potatoes are now in stock in the Garden Centre, shop a huge variety 9am – 5pm 7 days a week.

From earthy new potatoes and bite-sized salad varieties, to floury bakers and roasters, the humble potato remains the nation’s favourite vegetable. If you’re a potato aficionado, there’s a huge number of exciting potato varieties you can grow that you’ll never see in the shops. You don’t even need a garden to grow them – many grow very happily in large bags or pots on a balcony or patio.

There are three main types of potato to grow, named according to when you plant and harvest them.

First early or ‘new’ potatoes are the earliest to crop, in June and July. They don’t store for long so are best eaten fresh.

Second earlies (also called ‘new’ potatoes) take a few more weeks to mature and are harvested in July and August. These also don’t store for long, so are best eaten fresh. Salad potatoes have a firm, waxy texture and many have an intense, nutty flavour. They are usually first earlies or second earlies.

Maincrop potatoes take the longest to mature and are harvested from August to October. They are suitable for baking, roasting and mashing, and can be stored for a few months.

How to grow potatoes at home

Potatoes are easy to grow – one seed potato will produce many potatoes to harvest. Prepare the soil by digging and removing weeds, and then dig straight trenches 12cm deep and 60cm apart. In spring, plant seed potatoes 30cm apart and cover them with soil to fill the trench. When the shoots reach 20cm tall, use a rake, hoe or spade to mound soil up around the bases of the shoots, covering the stems half way. This is called earthing up. You can also grow first early and second early potatoes in a large bag on a patio or balcony, covering them with compost as they grow.

When to plant potatoes

First early potatoes can be planted from mid-March, while second earlies should be planted a couple of weeks later. Maincrop potatoes are usually planted in April and need to stay in the ground longer to produce a good crop. However, planting times vary across the country – planting in northerly areas should be delayed by a couple of weeks, depending on temperatures and risk of frost.

In warmer regions it’s possible to plant a second batch of maincrop potatoes in late summer, which will yield a crop of delicious potatoes for Christmas.

Before planting, you need to ‘chit’ your potatoes. This involves letting the potatoes grow shoots, which will give you a bigger potato crop. Place seed potatoes in trays or egg cartons with the end that has the most eyes uppermost. Stand in a cool, light spot until 1-2cm long shoots have formed. This could take up to six weeks. 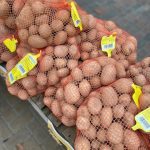 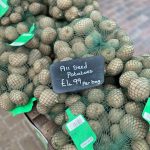 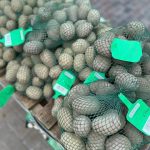